Week One – What is Human Trafficking? 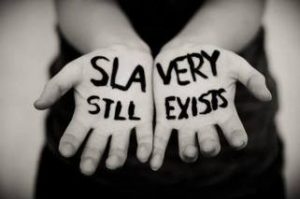 Human trafficking, the modern day practice of slavery, can be described most simply as “activities involved when one person obtains or holds another person in compelled service”. The term trafficking in persons can be misleading because the emphasis is on the transaction aspect, but the crime is enslavement and exploitation of people, day after day for months or even years. Traffickers use force, fraud, or coercion to control other people for the purpose of engaging in commercial sex or forcing them to provide labor services against their will. All trafficking victims share one essential experience – the loss of freedom.

According to the United Nations’ ‘Global Report on Trafficking in Persons’ (2016), the victims of trafficking include: women (51%), girls (20%), boys (8%) and men (21%). Many people associate trafficking with transnational operations, but the fact is that most exploitation takes place close to home. In most cases, the victims and the traffickers often have the same background, and may even be related.

The Catholic Church has long spoken out against human trafficking. In July 2016, Pope Francis said: “Human trafficking is an open wound on the body of contemporary society, a scourge upon the body of Christ. It is a crime against humanity.” He went on to say that those who suffer from forms of modern slavery are “the least among us” and that all people are called to renew their commitment to improving the human condition.

Bakhita House is named after St. Josephine Margaret Bakhita who was born in 1869 in the Darfur region of the Sudan. In 1877, when she was eight years old, she was kidnapped by Arab slave traders and spent the next 12 years enslaved. Eventually she was brought to Italy – and her freedom – through the help of the Canossian Daughters of Charity. She took her final vows in 1896 and for the next 42 years dedicated her life to sharing her testament of deliverance from slavery and comforting the poor and suffering. She died on February 8, 1947.

In 1958, the process of canonization began for Josephine under Pope John XXIII. On December 1st, 1978, Pope John Paul II declared her venerable. Sadly, the news of her beatification in 1992 was censored in Sudan. But just nine months later, Pope John Paul II visited Sudan and honored her publicly. He canonized her on October 1, 2000.

The U. S. Conference of Catholic Bishops (USCCB) has organized an anti trafficking program and considers trafficking an assault on the dignity of every person. USCCB has designated February 8th as an annual Day of Prayer for Victims and Survivors of Human Trafficking. February 8th is the Feast Day of St. Josephine Margaret Bakhita.